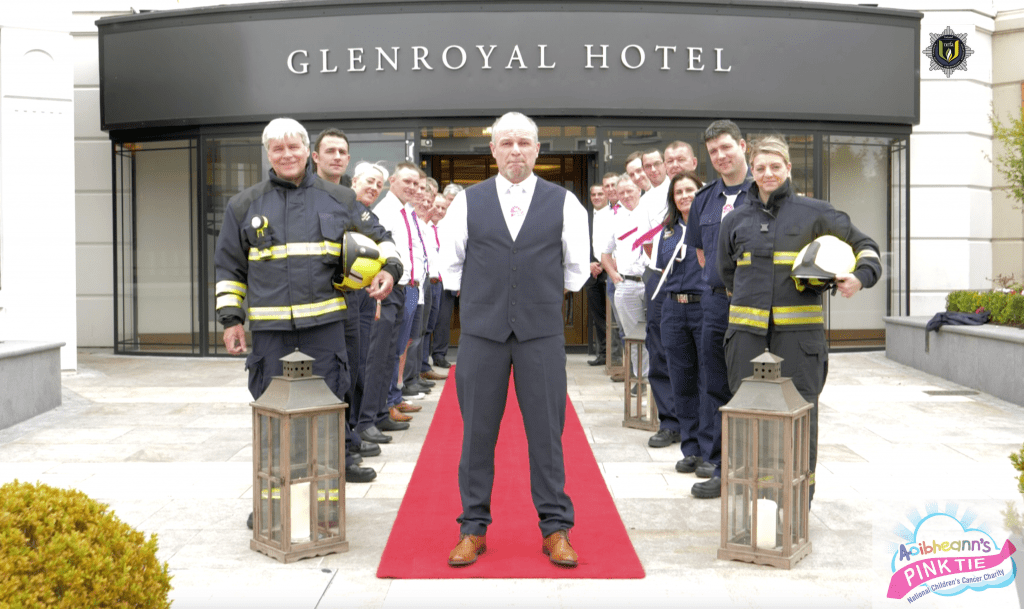 There were smiles aplenty in Maynooth’s Glenroyal Hotel on the 20th of July 2019 as the National Retained Firefighters Association officially launched their National Bucket Collection. The NRFA, in conjunction with Aoibheann’s Pink Tie, welcomed the children of St. John’s Ward Crumlin to the Kildare venue as part of their biannual fun day.

Arriving in style under fire service escort, the children were greeted by a Guard of Honour formed by NRFA members from, Carlow, Cavan, Donegal, Galway, Kildare, Laois, Leitrim, Limerick, Mayo, Offaly, Tipperary, Sligo, Waterford, Westmeath and Wicklow, and were officially welcomed to the venue by Stephen McFadden, Chairperson of the NRFA.

The day’s VIPs immediately enjoyed the array of sweets and candies on offer as proceedings got underway. Speaking on the day, Mick Rochford of Aoibheann’s Pink Tie welcome the esteemed guests and their families, before detailing how Aoibheann’s Pink Tie became the charity of choice for the NRFA’s fundraising initiative.

“It was very cold when Steve and Robbie came in for our first meeting in our new unit in Blanchardstown and they were asking questions about CEO’s and salaries and stuff like that. So basically, there is two small salaries that go from Aoibheann’s Pink Tie, two part-time paid employees, and every single other person involved in Aoibheann’s Pink Tie is voluntary. This is our tenth party. We have two annual parties for Aoibheann’s Pink Tie; one in the summer and one at Christmas, so it gives folks from the wards something to look forward to.”

“We have a huge problem with accommodation. We housed about 80 families in 6 months, so that’s 160 families a year in respite from all around the country – we look after them, bring them up to Crumlin Hospital and pay for accommodation for the families so their child can get treatment.”

Mick’s sentiments of appreciation were echoed as he called upon Jimmy Norman, whose own experience with his daughter Aoibheann, prompted the pair to set up the charity in 2010.

“It is an absolute honour for me and for Michael and everyone at Aoibheann’s Pink Tie to have the support of the Firefighters of Ireland. For me and for Mick, it’s phenomenal – we are completely overwhelmed. As Mick said, Aoibheann was diagnosed with cancer in 2009 on the 22nd of January, she fought a very hard battle for a year and sadly she lost her life on the 7th of April 2010. She was only 6 days away from her 9th birthday. But from that experience on St. John’s Ward, we started the National Children’s Cancer Charity because it’s hard to believe at that time in 2009/2010 there was no National Children’s Cancer Charity, which we didn’t know about. All we wanted to do was try to help the families practically and so one of our big interventions was financial intervention, which we still do. We do supply accommodation for families, 3 to 4 families a week in hotels around Dublin that we pay for. But obviously this is something we would love to get away from. We would love to have our own accommodation, and we are not too far away from completing what I think is an absolute miracle. We have bought our first house and the guys are in the process of doing it up. It will house one family at a time because of the need for privacy. Everything you’re doing; you’re fighting for your child, and to have your own accommodation is a great need. But again, I am very proud and overwhelmed that in ten years we could have come this far and to have all you guys behind us, this is what I would always term as one of Aoibheann’s miracles. Go raibh maith agat.”

Attendees fought back the tears as the family members of the day’s VIPs shared their own heart-wrenching stories and explained the complexities of attaining accommodation of any description in Crumlin while their children received treatment.

“We were put into Crumlin Communal House, someone could use it from all over Ireland. So it was 5 rooms using 1 toilet, 1 shower … as you can imagine, she’s diagnosed with cancer, she was 3 at the time, there was nowhere I would call safe to wash her, to look after her. We spent 5 days there then we were asked to leave, because we were from Dublin.” said Susan, who lost her own home while her daughter Millie was receiving treatment at Crumlin’s Children’s Hospital. Forced to rely on her family to find her feet following Millie’s treatment, Susan conceded that achieving the ultimate goal of building an accommodation unit would be much more than just bricks and mortar but in fact be a home for families during an incredibly stressful and difficult period.

As proceedings drew to a close, the children were asked to visit a large table towards the back of the room upon which was a range of gifts unique to each child and family. This invitation immediately invoked heart-warming screams of joy and excitement from the children who swamped the table without a second thought, while their appreciative families thanked all involved.

August 31st will see firefighters across Ireland don pink ties and vests and take to the streets of their respective cities and towns in an effort to raise funds for a purpose built accommodation unit in close proximity to the National Children’s Hospital. Suitable for up to 5 families this unit will relieve the stress of attaining accommodation for families battling pediatric cancer across Ireland.

If any Station or County has any questions in relation to the above, simply contact us at admin@nrfa.ie. Please do not make assumptions without first being furnished with the correct information. Aoibheann’s Pink Tie are setting up a bank account solely for the purpose of this collection under their remit as the national children’s cancer charity and we as an association will not manage the funds directly.

We would like to strongly communicate the fact that you do not have to be a member of the NRFA to take part in this collection. If you are not a member of the NRFA, you can still take part in the collection but you must coordinate through your local NRFA committee. This is a very important project that all firefighters can be a part of. This campaign is bigger than anyone of us. It is about coming together for the less fortunate members of all our communities and putting the fire out on childhood cancer.

Buckets, Vests, Ties, Posters and logistics will all be available for collection at our meeting on August 10th at the Glenroyal Hotel, Maynooth.

Local Chief Fire Officer letter and collection application for local Gardaí are available for download on the documents section of the NRFA website.